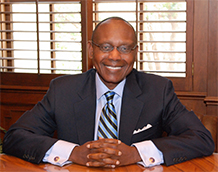 Emmanuel E. Edem is a partner in the Oklahoma City law firm of Norman & Edem, PLLC. He earned a juris doctor degree from Oklahoma City University. He is listed in “Best Lawyers in America”. Mr. Edem has been listed as an Oklahoma “Super Lawyer” every year since the inception of the ranking. He is also rated AV – the highest rating of a lawyer given by the peer reviewed Martindale reviewing system.

During law school, Mr. Edem was the case comment editor of the Oklahoma City University Law Review and a member of the National Moot Court Team. He received the Duane Box Faculty Award for his outstanding work as a student advocate.

In 1989, Oklahoma City University recognized Mr. Edem as a Distinguished Law Alumnus. The university conferred on him an honorary doctor of laws degree. He currently serves as a member of the university’s board of trustees and chair of the law school’s executive board.

Mr. Edem is a sustaining member of the American Association For Justice (formerly known as the Association Of Trial Lawyers Of America) and has served as a faculty member at the National College of Advocacy and the Ultimate Trial College at Harvard Law School . He has also taught as an adjunct professor at Oklahoma City University School of Law. He is a past president of the Civil Justice Foundation and a trustee of the Roscoe Pound Foundation.

Mr. Edem’s practice is limited to serious personal injury and wrongful death cases, products liability, medical malpractice and general civil litigation. Mr. Edem is also involved, on a national basis, in cases arising out of the sub prime mortgage crisis, and the securitization of mortgage loans by the financial industry.